NOT FOR DISTRIBUTION IN THE UNITED STATES OR TO U.S. NEWSWIRE SERVICES

Vancouver, BC – September 28, 2021 – Comstock Metals Ltd. (TSX-V: CSL) (“Comstock” or the “Company”) is pleased to announce that it is has amended the terms of its previously disclosed  proposed non-brokered private placement of units (“Units“) and flow-through units (“FT Units“) (see press release dated March 12, 2021).

The Company will use the gross proceeds of the offering of FT Units for eligible exploration expenditures, which will constitute “Canadian Exploration Expenses” (“CEE”) that are “Flow-Through mining expenditures”, as defined in the Income Tax Act (Canada) which can be renounced to purchasers of the FT Units for the 2021 taxation year in the aggregate amount of not less than the total amount of the gross proceeds raised from the flow-through offering.  The CEE shall be incurred no later than December 31, 2022.

The proceeds from the offering of Units will be used to fund exploration on the Company’s Preview SW gold deposit (with a focus on Comstock’s Preview North zone) located in Saskatchewan, Canada and for general working capital.

The offerings are being offered on a non-brokered private placement basis in certain provinces of Canada and such other jurisdictions as the Company may determine in its sole discretion and will be subject to a statutory hold period of four (4) months and a day from the closing of the offerings. The Company may pay finder’s fees in accordance with the rules and policies of the TSX Venture Exchange. The offerings remain subject to the approval of the TSX Venture Exchange. The securities to be issued under the offerings have not been, and will not be, registered under the U.S. Securities Act or any U.S. state securities laws, and may not be offered or sold in the United States or to, or for the account or benefit of, U.S. persons absent registration or any applicable exemption from the registration requirements of the U.S. Securities Act and applicable U.S. state securities laws.

Pursuant to the proposed offering, insiders within the Company (including the Company’s CEO Steven Goldman as well as the Company’s Chairman Arnold Tenney, or parties related to the CEO and Chairman) will be participating. As such, the Company will be issuing securities to purchasers that are considered “related parties” (within the meaning of Multilateral Instrument 61-101 – Protection of Minority Security Holders in Special Transactions (“MI 61-101“)), making the applicable offering a “related party transaction” (within the meaning of MI 61-101) (the “Related Party Subscriptions“). If such sales are completed the Company will be exempt from obtaining a formal valuation for, and minority approval of, the Related Party Subscriptions pursuant to Section 5.5(b) and 5.7(1)(a) of MI 61-101, respectively.  Mr. Goldman has previously filed an early warning respect to the securities of the Company which he owns or has control of and the securities being acquired under the offering are not anticipated to result in a change of ownership that would necessitate the filing of an updated early warning report.

Closing of the offerings remains subject to approval of the TSX Venture Exchange.  The Company did not seek Exchange approval for the financing announced on March 12, 2021 and as a result the price protection associated with such financing has lapsed.  This press release will serve as the price reservation for the current offerings referenced herein.

This press release shall not constitute an offer to sell or the solicitation of an offer to buy nor shall there be any sale of the securities in any state in which such offer, solicitation or sale would be unlawful. The securities being offered have not been, nor will they be, registered under the United States Securities Act of 1933, as amended (the “1933 Act“) and may not be offered or sold to, or for the account or benefit of, persons in the United States or “U.S. persons” (as such term is defined in Regulation S under the 1933 Act) absent registration or an applicable exemption from the registration requirements of the 1933 Act any application state securities laws. 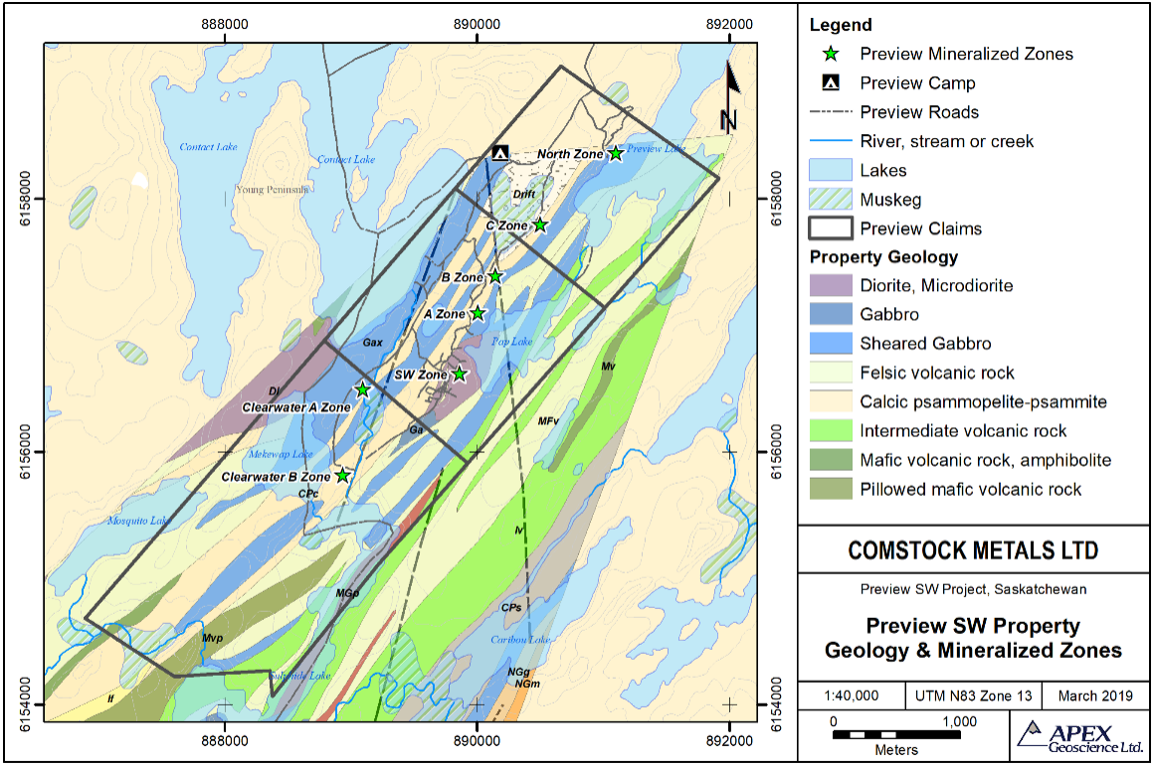 For further details, see the Company’s website at www.comstock-metals.com

The scientific and technical information contained in this news release as it relates to the Preview SW Gold Project has been reviewed and approved by Kristopher J. Raffle, P.Geo. (BC) Principal and Consultant of APEX Geoscience Ltd. of Edmonton, AB and a “Qualified Person” as defined in National Instrument 43-101 – Standards of Disclosure for Mineral Projects.  Mr. Raffle verified the data disclosed which includes a review of the analytical and test data underlying the information and opinions contained therein.